Ngari Prefecture on the Horizon, the Kingdom of Creatures
China Environment News

Ngari Prefecture on the Horizon, the Kingdom of Creatures Kiangs in the Lake Manasarovar Reserve. Photo by Zhao Xiaoyu 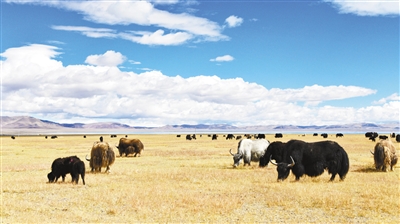 Yaks in the pastures around Zhari Namco. Photo by Zhao Xiaoyu 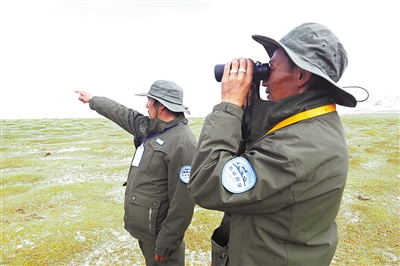 The administrators of the Chang Tang National Nature Reserve are patrolling. Photo by Deng Jia

Have you ever heard of the "distant horizon"?

The strong wind roars past, and the dazzling light spreads. That's Ngari Prefecture in Tibet, located in the west of Qinghai-Tibet Plateau and in the hinderland of Chang Tang Grassland, at an average altitude of more than 4,500m.

Have you ever been to the "ridge of the roof of the world"?

The animals and plants are thriving, and the mountains and rivers are charming. That's the kingdom of creatures, and you can hardly connect it with "no man's land" or "plateau desert".

Holy Mountains and Lakes, Zanda Earth Forest, Dark Sky Park... Ngari Prefecture in Tibet has a vast territory with rich resources and well-preserved cultural landscape and ecosystems, making it known as the "last pure land in the world".

In this pure land, "mountains, rivers, forests, farmlands, lakes, grasslands, deserts, glaciers, and snow mountains" are a community of life. On the boundless plateau and huge wilderness, alpine meadows are accompanied by gobi deserts, and rivers and lakes contrast finely with snow mountains. In the mountains and valleys, Tibetan antelopes and kiangs are running away, and farmers and herdsmen live comfortably, jointly interpreting the biodiversity story of harmonious coexistence between man and nature.

Respect: feeling the mountains and rivers

On September 22, in the Lake Manasarovar National Wetland Nature Reserve at an altitude of 4,560, the watery blue Lake Manasarovar was like a blue sky painted on the ground, showing its beauty and charm under the backdrop of the snow-covered Gurla Mandhata.

Tsering Wangmo, 20 years old, is patrolling the lake with her colleagues, carefully checking for any garbage. There are the 12 wetland administrators of farmers and herdsmen employed by Jiwu Management Station of the Nature Reserve.

They do not only pick up litters during the patrol, but also check for any dead animals or damaged wetlands and grasslands through the telescope. Any problem found will be immediately reported to relevant authorities.

As the alpine endorheic lake with the largest reserve of fresh water in high-altitude areas in the world, the Lake Manasarovar is the most representative and typical lake wetland in alpine regions in the world, and plays a critical role in supporting the ecosystem, living system and socio-economic system in special dry desert climate zones.

Tsering Wangmo, native of Hor Township, Burang County, became a wetland administrator with a monthly salary of RMB 1,800 at the Jiwu Management Station of the Nature Reserve, when the Nature Reserve was recruiting for the position in the county in August 2018. She is very satisfied with this job, and said: "my job is to protect the Lake Manasarovar from pollution, and the wild animals and plants around from damage and interference. This is a stable job, and I hope visitors from all over the country can come to my hometown."

This is the paradise for wildlife. The Lake Manasarovar National Wetland Nature Reserve distributes 34 families, 87 genera and 140 species of higher plants, and 28 national key protected animals including kiangs and black-necked cranes. It is one of the regions with high biodiversity in alpine grassland and desert regions in Tibet.

"By constructing the wetland nature reserve, we can fully maintain the biodiversity in the nature reserve, which helps conserve the functions of the ecosystem, and also promotes its virtuous cycle," said Lobsang Tenzin, director of Burang County Bureau of Natural Resources.

If mountains are high head of Tibet, then "Cuo" is her clear and bright eyes. Coqên County is located in the transition zone from Gangdisê Mountains to Chang Tang Grassland, where Zhari Namco and marsh wetlands around are good food depot and breeding place for waterfowls and wanders in their migration. It is passed through by the migration route of black-necked cranes, and is also an important habitat and breeding place for rare and endangered animals such as Tibetan antelopes and kiangs.

To protect this "clear and bright eye", the entire water pollution prevention and control project of Zhari Namco was included in the central water pollution prevention and control project reserve, and the ecological protection, restoration and construction of drinking water sources were promoted according to local conditions, involving all aspects of ecological environmental protection. Because of this, the number of wild animals and plants in Zhari Namco is on the increase.

Since 2014, the leased grassland in Ngari Prefecture has been used for the survival and habitat of golden wild yaks, reaching a population of 200 yaks; Every year, during the lambing season of Tibetan antelopes, Ngari Prefecture organizes professional administrators, wildlife guards and ecological post personnel to monitor and patrol the migration routes and fixed lambing areas of Tibetan antelopes according to their own jurisdictions, so as to strengthen the conservation of rare wild animals.

Go south from Shiquanhe Town, the capital of Ngari Prefecture, along the China National Highway 219, and drive for 255km into Xiangquan River Valley, then you can reach Zanda County.

Today, there are unique "earth-forest landform" wonders distributed on both sides of Xiangquan River Valley, and steep rocks can be seen everywhere, in various shapes and forms. This is the Zanda Earth Forest formed by the weathering of Tertiary strata which is the most typical and the largest in the world.

In the Zanda Earth Forest, the rock formations deposited at the bottom of the lake in the past, with different colors, bedding structures and material compositions, and the fossils of ancient animals and plants contained in them, provide direct or indirect evidence for people to interpret the changes of the paleogeography and paleoenvironment of the plateau.

Conservation of Zanda Earth Forest is also a reflection of China's great emphasis on the protection of biological resources.

In view of the scarcity of plant resources in Xiangquan River, ecological restoration of soil and water conservation in key watershed in Zanda County, with grass seeds replanted and shrubs planted in degraded grassland.

Since 2020, Ngari Prefecture has carried out ecological restoration of key water conservation areas and construction of water conservation areas along the route, and completed the preliminary work of ecological restoration projects around Shiquanhe Town, upgrading project of centralized medical waste disposal center, and investigation project of groundwater arsenic exceeding the standard in Shiquan River basin, which will help biodiversity conservation.

In the quiet earth forest of Ngari, in layers of land with different heights, the proposition of biodiversity of harmonious coexistence between man and nature is bold and graceful, lasting for a long time.

"Today's Ngari has clear water, blue sky and pure land, with diversified animals and plants, and most of the mountains and rivers here are in their primitive state. It is one of the regions with the best environmental quality in Tibet," said Pu Chunjiong, deputy director-general of Ngari Prefecture Ecological Environment Bureau.

Protection: taking the road of harmonious coexistence between man and nature

The glacier water from the Himalayas flows southward along the foot of Gurla Mandhata, and through Burang Town, Burang Count, Ngari Prefecture, and then a quiet village appears. Duoyou Village, the "first village of ecological civilization" in Ngari Prefecture, is also known as "Little Jiangnan in Ngari".

From mountains without vegetation and full of rocks, Duoyou Village has changed into a place with beautiful scenery of green trees and flowers. Dawa Tsering, the 54-year-old village party committee secretary, has been a village leader since 1988, witnessing the ecological changes of Duoyou Village for more than 30 years.

Sea-buckthorn, Burang willow, Pangong willow and white poplar can be seen everywhere, and Duoyou Village is a typical "planted village of ecological civilization". With respect for nature, the villagers in Duoyou Village have planted trees spontaneously and by the whole people, increasing the planted area from more than 500 mu in 2010 to more than 4,000 mu today, which has made the village with luxuriant and green vegetation today.

What is also worth mentioning is the clear river water. 76-year-old Tsering Yangzong and 40-year-old daughter-in-law Gungsang Choedon are washing vegetables for lunch. The water supply project implemented since 2012 has led to a closer relationship of villagers in Duoyou Village with Peacock River.

Gungsang Choedon told us that it used to take two hours to fetch water from Xiari Ditch 3km away, but now every household can use tap water, making life more convenient.

"We don't chop down a single tree or bush, and we don't pollute any spring or stream," said villagers who are more and more aware of ecological environment protection. They are paying more and more attention to the biodiversity of this "Little Jiangnan in Ngari".

They not only respect nature, but also protect it. In May 2020, a sanitation cleaning team was set up in Duoyou Village, responsible for the sanitation of the public areas or villagers' homes. In July 2020, a waste exchange supermarket was set up, encouraging villagers to classify garbage and dispose garbage in the mode of "collection by families, classified by villages, transported by townships, and disposed by counties".

Trees sway in the wind, and rivers moisten the earth. In Duoyou Village full of life, the scenery is as beautiful as a painting.

Since the 13th Five-Year Plan was implemented, the living environment of 37 townships and 145 administrative villages has been comprehensively rectified in Ngari Prefecture with the main line of promoting rural revitalization, improving living environment and serving economic development; improvement of drinking water and lavatories was carried out in agricultural and pastoral areas, pilot projects of rural sewage facilities and supporting pipe networks were implemented in various counties, with 2,502 safe water points built in rural areas, with 100% water supply coverage in agricultural and pastoral areas, leading to 1 autonomous ecological county, 24 ecological towns, and 120 ecological villages.

The biodiversity conservation benefits the present, and ecological balance benefits the future. The everlasting "roof of the world" has now become one of the regions with the best ecological environment, and an important ecological security barrier in China and even in Asia.

For more than 70 years, the road of harmonious coexistence between man and nature, under the life community of "mountains, rivers, forests, farmlands, lakes, grasslands, deserts, glaciers, and snow mountains", has been spreading in the remote Ngari, in the snow-covered plateau, and in beautiful China.