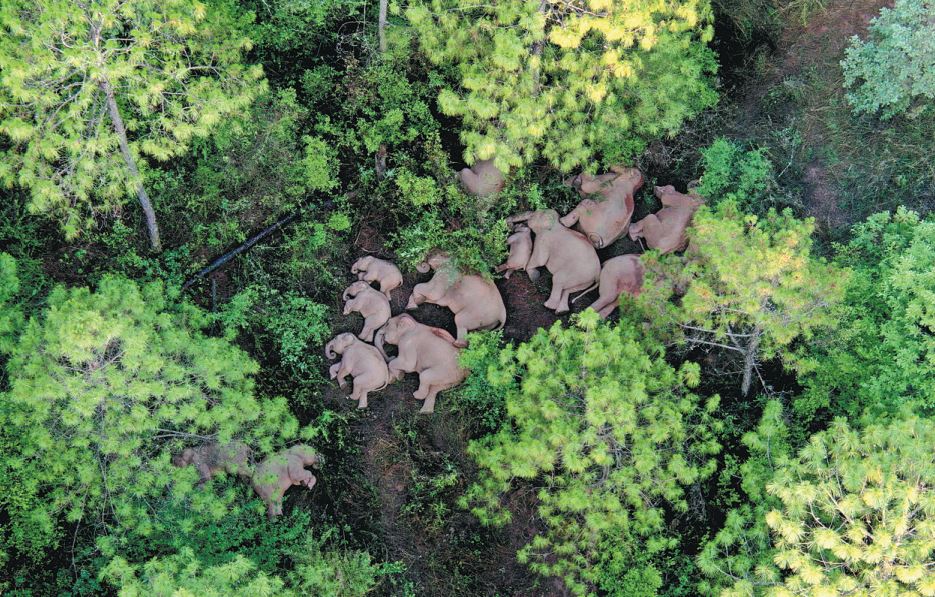 In the past month, Ming Qingzhong, a university professor in Yunnan, has been closely monitoring 15 wild Asian elephants that have traveled 500 kilometers north from their habitat in the south of the province.

The animals have made headlines in China and overseas, with local authorities going to great lengths to monitor them and keep them away from residential areas.

Ming and his team from the Tourism and Culture Industry Research Institute at Yunnan University of Finance and Economics in Kunming, the provincial capital, have proposed building an Asian elephant national park, aiming to better manage and restore the giant creatures' habitats.

"Such a national park urgently needs to be built. It is time that our proposal attracted much-needed public attention," Ming said.

A detailed plan has been drawn up to restore the elephants' habitats and to manage human communities in the region, including roads, public facilities, forests and farmland.

"Building a national park will fundamentally resolve the human-elephant conflict. Many people ask where these elephants are heading or where they should remain when they have finished roaming. A national park is the best destination," Ming said.

The Asian elephant, which is listed as endangered on the International Union for Conservation of Nature Red List of Threatened Species, enjoys Class-A protection in China－the same level as the giant panda.

Before the 1970s, the species was threatened by a number of factors, including a surge in the human population, reduced forestry areas and illegal hunting. Elephant numbers dropped significantly.

Due to determined protection efforts in recent decades, the numbers have risen from about 170 in the 1970s to around 300, according to the Yunnan Provincial Forestry and Grassland Administration.

The elephants in Yunnan live in the south of the province, which includes Xishuangbanna Dai autonomous prefecture and the cities of Pu'er and Lincang. Of the three locations, Xishuangbanna has the most elephants.

To protect the animals and other wildlife, the authorities in Xishuangbanna have expanded the prefecture's nature reserves from 240,000 hectares in the 1980s to 414,660 hectares today.

In 1996, a Wild Asian Elephant Valley was established－the prefecture's biggest wild animal rescue center. In 2009, China's first Asian elephant breeding base was established in the valley.

Guo Xianming, director of the research institute at Xishuangbanna National Nature Reserve, said: "The elephants will not stay forever in nature reserves. It is natural for them to expand their territory when they have a growing population, require a larger habitat and more food."

In past decades, the prefecture has adopted strict laws and regulations to protect its forests. However, these measures have resulted in rapid growth of vegetation, especially large trees, Guo said.

"Such efforts are crucial to better rainforest recovery, but might also lead to problems with the elephants' natural food supply," he said, adding that the expansion of invasive plants has made growing conditions more difficult for the animals' preferred food. 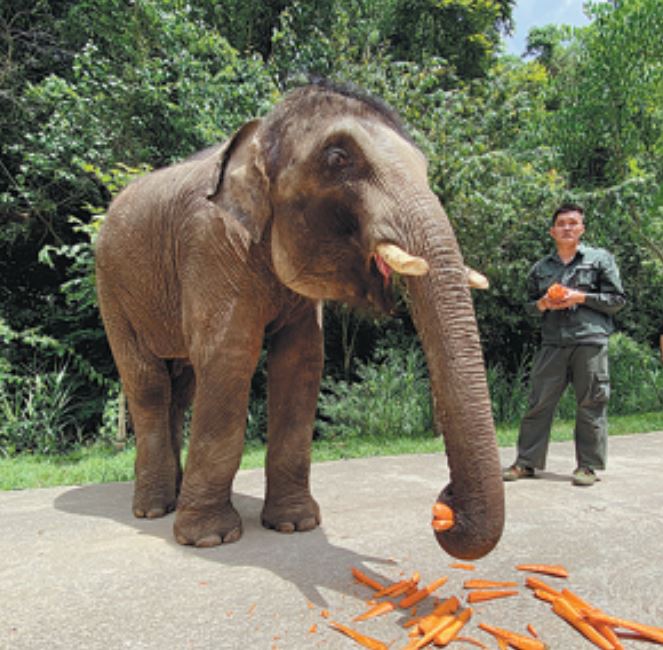 As the elephants seek more space for their offspring, conflicts have arisen between the animals and humans. Between 2014 and 2020, some 173 million yuan ($26.8 million) was paid in compensation in Yunnan for property losses caused by elephants, according to the provincial forestry department.

In early 2015, the department drafted a report on its plan to establish an Asian elephant national park.

Last year, a team from the Academy for Global Development at Beijing Normal University visited Yunnan twice to carry out surveys on the elephants' habitats. Based on the survey results, the team suggested a national park be built for the animals as soon as possible.

Wang Hongxin, head of the academy and the research leader, said: "China has launched pilot national parks across the country. A similar model can be applied in Yunnan. This will not only assist with a systematic protection plan for the elephants, but also help boost the region's biodiversity."

He said that in line with the national parks' management system, a well-designed plan will be formulated and related laws and regulations drafted, guaranteeing protection for the new park's wildlife.

Local residential areas, including those within the park, will be redesigned in an attempt to prevent conflicts between elephants and humans, he added.

"We expect to remap the elephants' habitat with an improved classification system, which will limit human activities in the core protected area," Wang added.

"Some small or isolated reserves will be connected and elephant habitats will be restored scientifically."

Wang also suggested introducing new technology for elephant surveillance and protection work, and building a data base to share information between rural areas and cities. He said such an open platform would further contribute to monitoring the elephants.

"Although Yunnan is the only area of China where these wild elephants live, they are State-protected animals and should be given more financial support from the central government," he added.

One of the main obstacles to protecting the elephants is that the main duties are shouldered by the authorities in areas most frequently visited by the animals.

Wu Zhaolu, a professor from Yunnan University's School of Ecology and Environment, said, "The recent case where the elephants headed north proved the necessity of building a national park, which will break administrative boundaries." 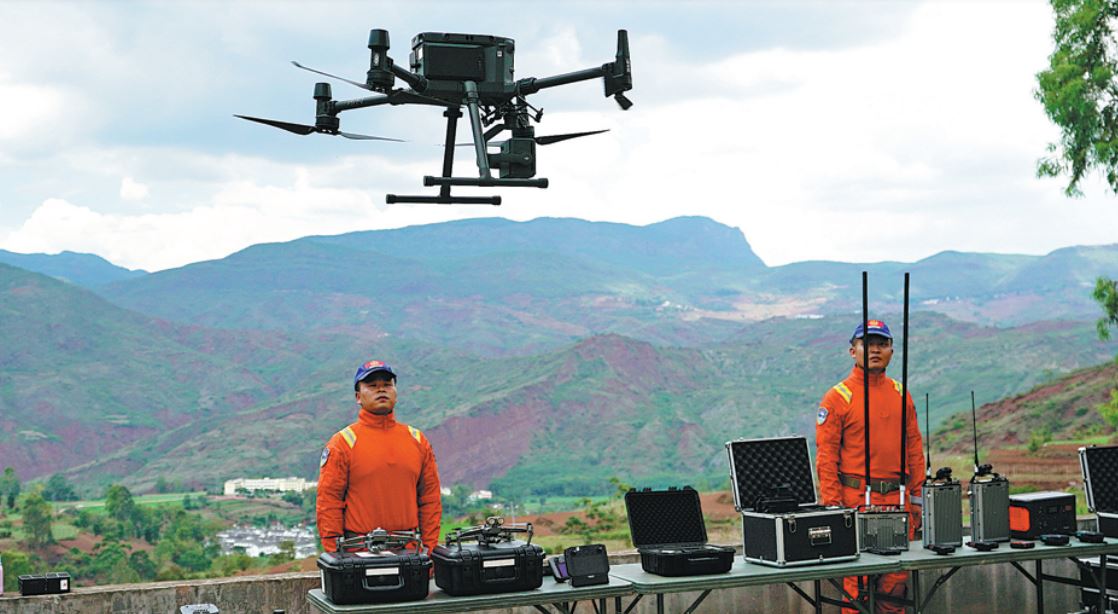 Firefighters set up a temporary headquarters in Xiangnan village, Yuxi, Yunnan, to monitor the elephants via drones. [Photo by Wei Xiaohao/China Daily]

China, which is among the world's 13 major habitats for wild Asian elephants, has made an outstanding contribution to protecting the species and increasing its population, Wu said.

"We can do even better. An Asian elephant national park will protect not only the elephants but also the region's ecosystem," he added.

Huang Wenbin, Beijing regional head of the World Wide Fund for Nature China, said, "Habitat restoration is the best way to resolve conflicts between humans and wild animals, including the elephants.

"Having such conflicts is not necessarily a bad thing, as it shows there is a booming population of wild animals as a result of the country's decades-long protection efforts."

In recent years, there have been more reports of wild animals, such as boars, bears and even tigers, encroaching on human society, Huang said.

China has promoted afforestation projects nationwide and significantly improved the environment, but nearly 50 percent of the country's forests planted in recent years consist of only about 10 types of trees, he said.

"As the country embarks on high-quality development, the plan for improving forests should be redesigned," he said.

"Those animals at the top of the food chain need to feed on smaller creatures. A great diversity of plants not only provides animals with food, but also with shelter and even areas where they can play," Huang said.

"There is no single solution for all habitats. Some regions can restore them naturally, while others may need a helping hand from humans," he said.

Huang and his team are conducting a pilot restoration project on the outskirts of Beijing. Based on scientific research, they have reduced forest density and adjusted tree species, with the aim of producing a more "friendly" environment for local biodiversity.

"Forest restoration is an extremely long-term plan. We will keep monitoring the results and hope the pilot will be helpful for other regions," he said.