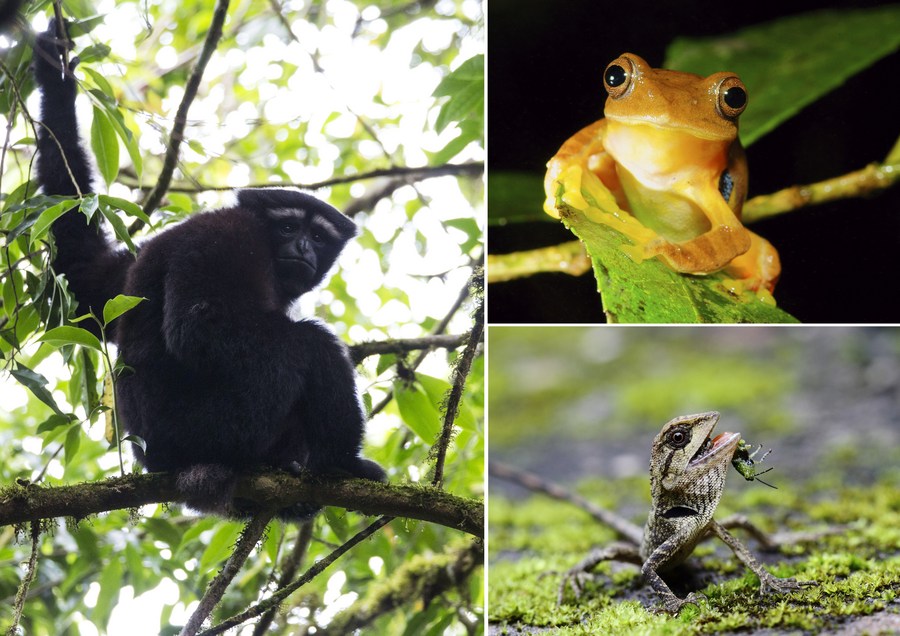 BEIJING, May 22 (Xinhua) -- As the global community celebrates the International Day for Biological Diversity on Saturday, China is exploring a solution to tackle the universal issue of biodiversity loss under the leadership of President Xi Jinping.

Piloting a market-based mechanism for green growth, China is actively fostering a new man-nature relationship in which both can prosper, living together in harmony.

"Ecological environmental protection and economic development are intertwined and complement each other," said Xi during a recent study session attended by the country's top leaders.

By carrying out major biological conservation projects and improving the mechanisms to encourage the green transition, China's practice sheds light on how ecological strength can be turned into economic strength.

As part of their beekeeping activity, local residents use as many as 38 kinds of plants to attract bees, build their homes and repel them where necessary. The bees pollinate local herbs, which people in the community sell to improve their lives.

The beekeeping techniques used by the Drung ethnic have been selected as a key biodiversity conservation project by the Ministry of Ecology and Environment to showcase the synergy that can exist between man and nature.

Addressing the Leaders Summit on Climate in April, Xi called on the international community to work together to foster a community of life for man and nature.

"We need to look for ways to protect the environment, grow the economy, create jobs and remove poverty, all at the same time," he said.

Just like the beekeeping project, the country's many ecological conservation efforts have disproved the assumption that there must be trade-offs between economic growth and environmental protection.

Stressing high-quality development of the region, Xi has reiterated that the restoration of the ecological environment of the Yangtze River should be a major priority.

Over the years, the country has shut down a large number of highly polluting and energy-intensive enterprises along the river and put into effect a 10-year fishing ban in pivotal waters to restore degrading biodiversity.

In the first quarter of this year, the region's 11 provinces and municipalities reported rapid economic growth, with their combined gross domestic product accounting for 46.5 percent of the country's total, higher than the 2020 and 2019 levels.

To better coordinate economic development and environmental protection, China is actively exploring and improving a market-based mechanism for green growth.

China will establish a sound mechanism for realizing the value of ecological products so that the protection and restoration of the ecological environment can be awarded a reasonable return, while the cost of damaging the environment can be paid correspondingly, Xi said at the study session.

Under the guidance of Xi's thought on ecological progress, China issued a guideline in April, vowing to establish a basic policy framework for the realization of the value of ecological products by 2025.

The various problems surrounding ecological products, such as the difficulty of valuing and trading them, will have been effectively resolved by that time, and an incentive mechanism to encourage environmental protection will take shape.

The country's ability to transform ecological advantages into economic advantages will have been significantly enhanced by then, according to the guideline.

Governments at different levels have taken measures to include indicators of green growth into their evaluation systems.

China's southern tech hub Shenzhen has established a "gross ecosystem product" (GEP) accounting system, which is the total value of final ecosystem goods and services supplied to human well-being and sustainable economic and social development, according to the municipal bureau of ecology and environment.

The bureau said GDP will no longer be the sole measure of Shenzhen's development in the future, and GEP will become an important indicator for the city's green growth.

In addition to its efforts in achieving modernization that features harmony between nature and humans, China also aims to work closely with its global partners to restore the ecological balance on Earth, honoring its commitments while encouraging others to do so.

In October this year, the country will host the 15th meeting of the Conference of the Parties to the Convention on Biological Diversity (COP15) in Kunming of Yunnan. Participants are expected to work out concrete plans for post-2020 global biodiversity protection.