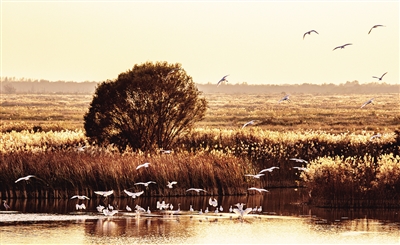 This picture shows the cranes are dancing in the golden autumn in the wetland at the estuary of the Yellow River in Dongying City. Photographed by Shang Taiguo This picture shows the grand yellow and blue spectacle at the estuary of the Yellow River in Dongying City. Photographed by Zhao Wenchang

In the midsummer season, the Yellow River Delta National Nature Reserve in Shandong is full of greenery, vitality, emerald green reeds swaying in the wind and rare birds such as oriental white storks, larus saundersi, and egrets flying and singing... This reserve is located at the estuary of the Yellow River, with a total area 153,000 hectares, it is a kind of wetland type natural reserves with the protection of the newly born wetland ecosystem and rare and endangered birds in the Yellow River Estuary as the subject, and there is the broadest, most complete and youngest wetland ecosystem in the warm temperate zone in China.

"Birds International Airport" is worthy of the name

An oriental white stork that is feeding its offspring is wearing a ring mark marked with S51 on its leg. The personnel in the reserves have been monitoring it for many years. After this migratory bird returned to the reserves this spring, it chose to settle here, and its babies are growing up and becoming full-fledged healthily now.

The oriental white stork is an endangered bird in the world and also a national level I protected animal as a large wading bird, and strict requirements are imposed on its living environment of its breeding place. In recent years, with the implementation of ecological water replenishment and wetland restoration projects, the overall environment of the wetlands in the Yellow River Delta has been significantly improved, and more and more oriental white storks choose to breed and live here.

Wang Xiufeng said that Dongying City has formulated the Ecological Protection and High-quality Development Plan for the Yellow River Delta in Dongying City and 9 special plans based on high standards in recent years, performed the solid jobs in ecological protection, restoration and environmental governance and implemented biodiversity projects such as the protection of breeding habitats for key species and the protection of birds such as black-billed gulls and oriental white storks., and remarkable results have been achieved in biodiversity protection.

Birds can vote with their wings when the ecological environment becomes good. The Yellow River Delta is known as the "Birds International Airport", where more than 6 million birds of various species migrate through each year, two of the 9 migratory bird migration routes in the world pass through this area, and it is an important bird migration "transfer station", wintering ground and breeding place in the inland of Northeast Asia and the western Pacific Rim.

The Ecological Environment Orientation Observation and Research Station of the Yellow River Delta listed and established in Dongying in May of this year is the first ecological environment observation station in the Yellow River Basin. It is understood that the observation station will perform comprehensive observations on the local ecosystem pattern, land use, wetland resources, etc., perform the observational research on the population types, population numbers, distribution locations and activity behaviors of the national key protected species in the Yellow River Delta (such as the red-crowned crane, the great bustard, and the oriental white stork), survey and assess the biodiversity.

Song Jibao (the secretary of the Party Committee and Director of the Department of Ecological Environment of Shandong Province) told the reporter: "The Ecological Environment Orientation Observation and Research Station of the Yellow River Delta is one of the results of the strategic cooperation framework agreement between the Chinese Research Academy of Environmental Sciences and the Shandong Provincial Department of Ecology and Environment. According to the agreement, both parties shall follow the principle of complementing each other's advantages, mutual benefit and win-win, equal consultation and coordinated advancement', innovate the cooperation mechanisms, expand the cooperation areas, improve the ecological environment governance capabilities and governance technology levels in Shandong Province, promote the development and growth of environmental protection industries and jointly create new pattern of ecological protection and high-quality economic development."

In 2010, the Ecological Water Diversion of the Yellow River Delta - the over-current restoration test of the Diaokou River Course was launched, rejuvenating the Diaokou River which had been suspended for 34 years. By the end of 2019, the accumulated ecological water replenishment quantity of Diaokou River had been 243 million cubic meters, and the ecology along the river had been effectively improved.

The accumulated ecological water replenishment quantity of the Yellow River Delta was 174 million cubic meters last year,, which was more than twice of the average value in the past 10 years. After large-capacity ecological water replenishment, according to the comprehensive monitoring data, the water area of the Yellow River Delta reached 59,000 hectares, the area of offshore low-salinity areas was up to more than 100,000 hectares, and the confluence of rivers and seas was expanded by as far as 23 kilometers, which greatly contained the tendency of destruction of the wetland ecosystem due to sea water encroachment, slowed down the process of soil salinization and secondary salinization and enhanced the natural restoration capacity of the wetland ecosystem in the Yellow River Delta. Simultaneously, 72,500 mus of farmland were converted to wetland and beaches in the Natural Reserves.

When you come to Dongying, Shandong, you must not miss the spectacle of "yellow and blue water confluence" at the estuary of the Yellow River. The majestic Yellow River encounters the azure sea, thereby creating a magnificent spectacle.

How can Dongying do well in terms of global tourism and turn the advantages of ecological resources into development advantages with the help of the three world-class tourism resources including the confluence of rivers and seas, the new wetlands and the wild birds?

Dongying City has formulated a three-year action plan for "enriching people through tourism" closely following the goal of "creating a cultural tourism destination at the estuary of the Yellow River in order to strive to develop the cultural tourism industry into a pillar industry for enriching Dongying, an industry which can benefit the people and make them happy in Dongying and a livable ecological industry in Dongying.

Dongying City has invested RMB 190 million in building many projects such as the VR experience pavilion with the themes of the boat tour on the White Stork Lake and the Yellow River flowing into the sea, thereby enriching the cultural experience projects at the estuary; The newly built bird watching houses and bird watching stations can allow tourists to watch and shoot without disturbing wild birds as much as possible. The first cruise on the Beicha River was realized last year, and there have been more and more diversified ways to view the landscape of the "convergence of rivers and seas".

During the "May Day" holiday this year, concerts and cheongsam catwalks were also held in the ecotourism area at the estuary of the Yellow River; The projects in the modern fishery demonstration zone Hongtan Wetland Tourist Resort (such as gathering seafood on the beach when the tide is ebbing and water park) attracted many tourists to participate in; There were many splendid activities organized, such as the 10th Yellow River Delta Wetland Sophora Flower Festival and Swan Lake Cycling Tour.

During the "May Day" holiday this year, more than 60,000 tourists visited the ecotourism area at the estuary of the Yellow River, setting a record for the same period in history. A tourist from Sichuan said happily: "I enjoy here a lot, and its cultural landscape is very beautiful. I feel different and very comfortable every time when I come here"