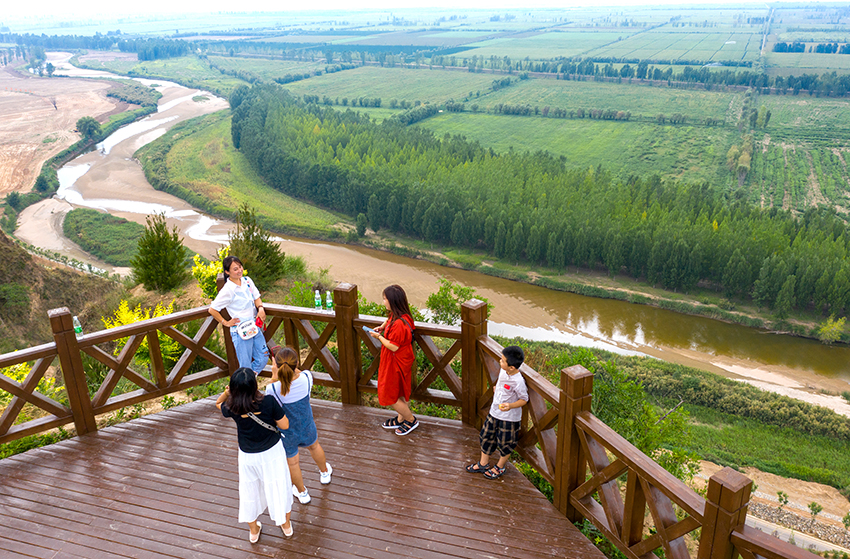 TAIYUAN－Yu Mingliang, a resident of Hengpo village, Shanxi province, has relied on temporary jobs for most of his life but now enjoys a stable income based on ecotourism.

Hengpo is an example of the successful transformation of poor and barren land into a prosperous village that has developed tourism through afforestation.

The village has planted more than 667 hectares of trees in the past decade. Meanwhile, well-preserved traditional cave dwellings in the village have attracted investment of 120 million yuan since 2011 from a local company that has upgraded their infrastructure.

"Our advantage is that we are only half an hour away from the ancient city of Pingyao, a UNESCO World Heritage Site," said village official Guo Xingfeng. "Many tourists come here to experience real country life after visiting there."

He added that Hengpo also launched a light show during the Spring Festival and summer vacations to attract tourists.

By last year, the village had received more than 1.8 million tourists from home and abroad, with total income exceeding 36 million yuan. The per capita income of villagers has increased from 15,000 yuan to 17,200 yuan since 2016.

Located in the world's largest loess area, Shanxi registered a forest coverage rate of only 2.4 percent in the 1950s, when soil erosion and ecological fragility took their toll.

As China pushes forward on a green and sustainable path, afforestation and returning farmland to forest have been carried out nationwide. Thanks to continuous efforts, Shanxi's forest coverage rate reached 23.2 percent last year.

More farmers are now devoted to ecotourism as the environment continues to improve. In Dazhai village, about 200 kilometers east of Hengpo, young people who once pursued high incomes in big cities began to return to their hometowns.

With little land to farm, Dazhai was a mountain-locked and drought-prone village. In a bold attempt to overcome nature, locals began to open up mountains and fill ditches to build terraces, connecting scattered arable lands into layered belts by hillsides. Years of efforts made Dazhai a renowned model village in agriculture in the 1960s and 1970s.

"Making a living in megacities is no better than working in Dazhai," said Li Zhenjiang, 30, who had longed for the outside world and worked in Beijing after graduating from high school. But he felt his hometown was getting better each time he went back. Eventually, Li chose to stay and got a job with a local tourism company and is running two souvenir shops, with a yearly income of more than 100,000 yuan.

"Every household in Dazhai is a shareholder of the tourism company and receives a dividend of 3,000 yuan each year," said 73-year-old Guo Fenglian, who was labeled the "iron woman" for leading fellow villagers to fight harsh natural conditions to build terraces.

As a Chinese saying goes, if you want to get rich, build roads first. Shanxi is intensifying its infrastructure construction and plans to build a tourism road of 13,024 km by the end of 2025. The road will connect the province's three major tourist attractions to form a network that runs through the whole province.

Songmiao is an ancient village along the road, with tourists expected to pour in for its pleasant climate.

"The occupancy rate during the Dragon Boat Festival was 100 percent, and the daily net income of the whole village reached more than 40,000 yuan," said Liu Xinpeng, a local official, adding that since the village opened to tourists a year ago, villagers' average yearly income has increased to nearly 12,000 yuan, and will rise continuously as its infrastructure improves.

"Tourism has become a new way for farmers to stably beef up their income," Liu said. "We will continue to protect the ecological environment to ensure more people can benefit from it."