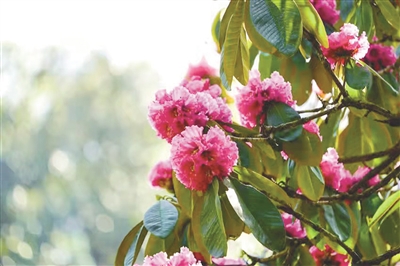 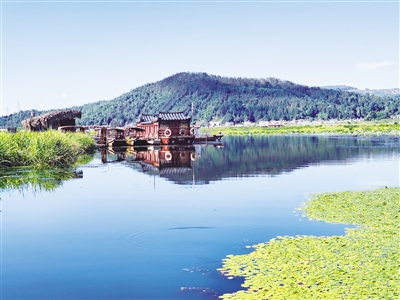 The Beihai Wetland is located 12.5km northeast of Tengchong in Baoshan City, Yunnan Province, with a total area of 1,629ha. There are wetlands in the reserve with an area of 215.69ha, which is the first batch of important provincial wetlands announced by the People's Government of Yunnan Province in 2016.

They boarded the boat and wandered on the water to explore the ecological landscape. In the reserve with high biodiversity, you can find rare plants such as water shield, trapa incisa and menyanthes trifoliata.

According to Zhang Wei, deputy director of Tengchong Branch of Gaoligong Mountain Conservation Bureau, the Wetland has magical landscapes brought by volcanic eruptions, and remarkable results have been achieved in terms of ecological conservation in recent years.

"The most intuitive change in the Beihai Wetland is the expansion of water surface, the increase of species, the wetland area of more than 3,200 mu, and the environmental improvement, which also leads to the frequent appearance of birds such as Baer's pochard. Meanwhile, the change of ecological environment has also boosted the economic condition of surrounding communities, increased residents' income, realized the transformation of green hills and clear waters, and both ecological and economic benefits have been improved," said Zhang Wei delightedly.

After leaving the Beihai Wetland, the reporters followed the interview group to the Linjiapuzi Management and Conservation Station of Gaoligong Mountain National Nature Reserve after tens of minutes of winding mountain roads, to have an interview on the biodiversity conservation achievements in Gaoligong Mountain.

Gaoligong Mountain, the boundary between China and Myanmar, is highly rich in biodiversity, and is known as the cradle of eastern Asiatic flora, the gene pool of world species, the world natural museum, the refuge of life, etc.

Into this kingdom of animals and plants, a lush original ecological landscape is presented in front of you.

Duan Shaozhong, secretary of the Party branch and deputy director of Tengchong Branch of Baoshan Management and Conservation Bureau of Gaoligong Mountain National Nature Reserve, said, "there are abundant species here, and we are also continuing to carry out species conservation and monitoring work, such as the flagship species Rhododendron giganteum, to understand its distribution and take rescuing conservation measures. Through scientific research cooperation, seedlings were cultivated and the preliminary planting was successful."

There is a saying circulating here: "four seasons in a mountain, and different weather every ten miles". The sudden rain made the reporters really know its meaning. But to explore Rhododendron giganteum, the "plant star" of COP15, and an endemic plant of Gaoligong Mountain, with the largest tree shape and the largest flower among more than 800 rhododendrons in the world, we chose to go up the mountain in the rain and find out its true appearance.

Rhododendron giganteum has been classified as a critically endangered species by the International Union for Conservation of Nature. By way of replantation, 200 seedlings are growing vigorously in the sunshine, rain and dew here, adding a touch of color to the forest.