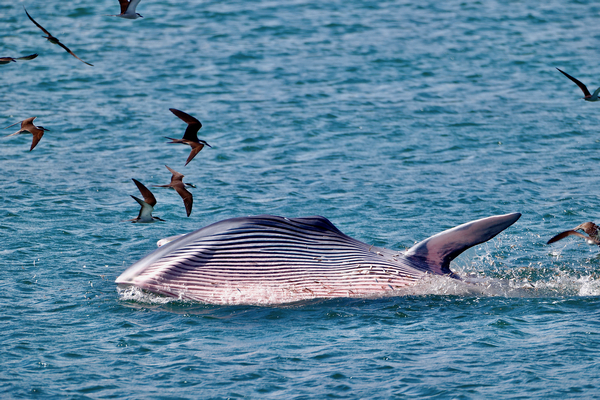 The map, released by the newspaper Chengdu Daily, marked about 20 areas where squirrels are frequently seen in a number of public places－not just parks but also residential areas and even hotels. 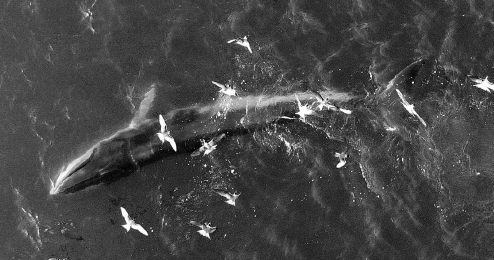 In a comment that appeared on the newspaper's Sina Weibo account, Chengdu resident Xin Yue said, "Thanks to the city's improved environment and people's stronger awareness of animal protection, in addition to squirrels, more wild creatures, including some protected birds, are now being seen more often in Chengdu."

For animal lovers nationwide, the chances of coming into closer contact with such creatures have risen in recent years, with an increasing number of animals being found roaming in cities or approaching areas where people live. 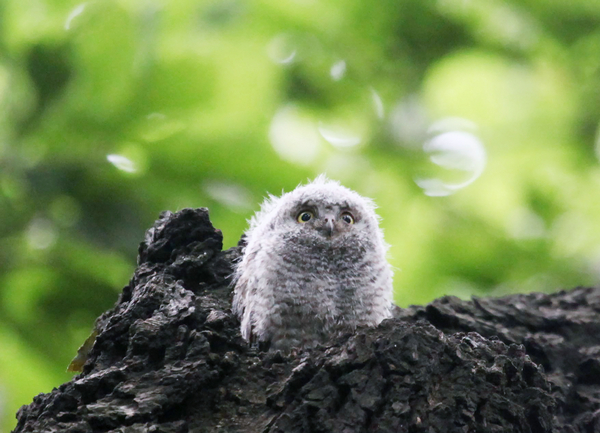 In Qinghai province, footage of animals that had not been seen since the 1990s, due to excessive hunting, has been captured by infrared cameras several times in the past three years. The animals include snow leopards and Chinese mountain cats, both listed as "vulnerable" by the International Union for Conservation of Nature.

In December, seven endangered alpine musk deer, which are classified as "endangered" on the IUCN's Red List of Threatened Species, were sighted in Qinghai's Three-River-Source National Park. Moreover, a herd of about 100 wild red deer under State protection was also observed by local rangers in February.

Similar cases have been reported off China's coast. On June 29, a Bryde's whale, a Class 1 protected species, was sighted by fishermen in Dapeng Bay near Shenzhen, Guangdong province.

Footage of the whale, which had been in the bay for more than a week and had an ample food supply, was taken by a local broadcaster, attracting some 300,000 views.

It was only the second time a whale had appeared in the bay in 16 years. According to the book Chinese Cetaceans, the previous sighting was in 2005 near Sha Tau Kok in Hong Kong.

Liao Baolin, an expert at the Shenzhen Research Institute of Guangdong Ocean University, said the whale's visit was a rare occurrence but was not surprising. The species has high requirements for food and water quality and is usually found in oceans, where there are plenty of fish.

Chen Cheng, who lives in Shenzhen and has noted the marine life population rising in the area, said: "The quality of coastal waters in Shenzhen has improved greatly in the past five years. It's easy to find jellyfish in these waters. I once came across a dolphin, so I hope whales will appear more frequently in the future." 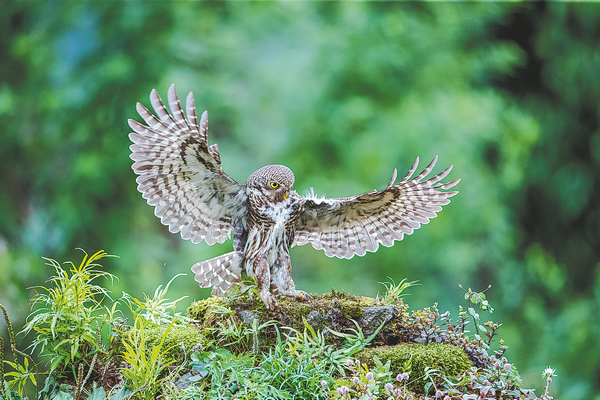 Environmental protection has been a key task for the central government in recent years.

From 2016 to last year, China established numerous nature reserves, covering 18 percent of its land area. The reserves have protected 90 percent of the country's plants and 85 percent of its wild animals.

In the past five years, the nation has also made significant progress in terms of greening and protecting natural resources, with 36.33 million hectares of trees being planted and comprehensive vegetation coverage on natural grassland rising to 56.1 percent.

Moreover, wetlands in China have expanded by 202,600 hectares during that time, making a significant contribution to water safety and environmental protection.

In February, a new List of Wild Animals under State Priority Conservation was released by the National Forestry and Grassland Administration and the Ministry of Agriculture and Rural Affairs－protecting 980 wild animals.

The Ministry of Natural Resources is accelerating the establishment of a national spatial planning system－a 15-year project for the use of natural resources, which prioritizes environmental protection.

Thanks to these determined efforts, the populations of some endangered wild species in China have risen steadily.

The number of giant pandas reached 1,864 by the end of last year after decades of determined efforts to protect the animals' habitat, Zhang said.

The crested ibis, an endangered bird known as "the oriental gem", which was once thought to be extinct due to human activities, has also witnessed stable population growth, with numbers rebounding to more than 4,000.

In addition, several wild animals once extinct in the wild, such as milu deer and wild horses, are now thriving again thanks to artificial breeding. 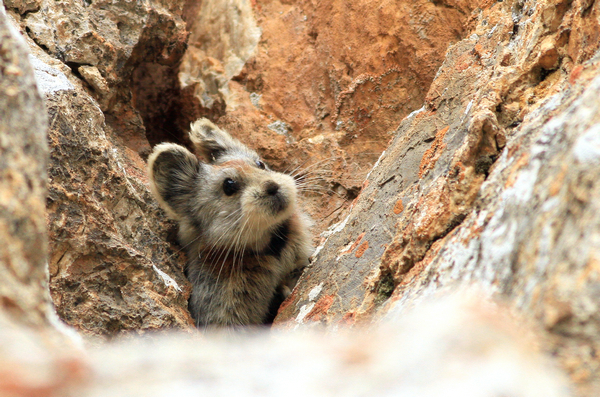 Last month, residents at Rosebush Country, a residential compound in a Shanghai suburb, complained about the frequent appearance of raccoon dogs.

Local media reported that several people had seen the animals, with video footage showing a confrontation between a raccoon dog and a resident walking two dogs in the compound.

Last year, the Shan Shui Conservation Center, a non-governmental organization that deals with such incidents, launched an investigation into raccoon dogs in Shanghai.

The probe found that the animals had spread mainly in the districts of Songjiang, Minhang and Qingpu, while smaller numbers of them were reported in Yangpu and Pudong.

Wang Fang, a researcher at the School of Life Sciences at Fudan University, said raccoon dogs are mainly attracted by food left by people for cats living wild in cities. After studying the behavioral changes in wild animals caused by urbanization and human activities, Wang said the number of raccoon dogs, a native species in the wild, has risen in Shanghai due to the improved environment.

"Leftovers have become the new source of food for these animals, and instead of caves and tree stumps, they are now living in spaces under buildings and in abandoned sewage pipes," he said.

Wang added that the rising number of raccoon dogs in the city has also inevitably resulted in conflicts with local residents. For example, reports of clashes between the animals and domestic pets, especially dogs, have been commonplace in recent years.

Zhao Qianqian, a graduate student at the School of Life Sciences at Fudan University, who investigated the raccoon dogs at the Rosebush Country compound on June 6, said the animals were probably protecting their cubs when they confronted the dogs.

Conflicts between humans and small animals such as raccoon dogs are comparatively easy to handle, but when clashes occur between local residents and large animals, finding the right solution is more challenging. 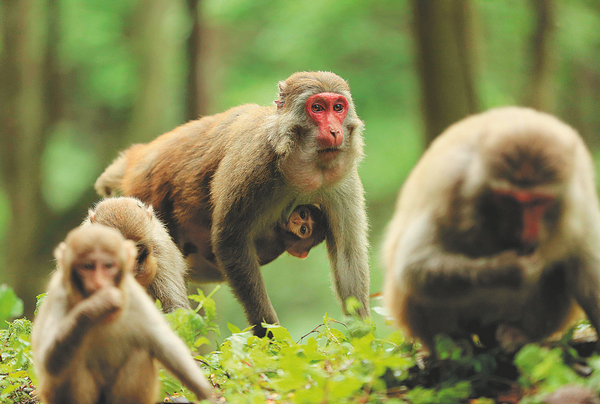 Last month, a herd of 15 wild Asian elephants in Yunnan province traveled about 500 kilometers north and arrived on the outskirts of Kunming, the provincial capital. Experts believed the animals had roamed so far to find new habitat due to human population growth.

In China, the elephant population, which numbered just 170 in the 1970s, has risen to about 300 thanks to conservation efforts and habitat protection.

As elephants seek more room for their offspring, conflicts between the animals and humans have arisen. From 2014 to last year, insurance compensation for property losses caused by elephants in Yunnan reached 173 million yuan ($26.69 million), according to the provincial forestry department.

Huang Wenbin, Beijing regional program head of the World Wide Fund for Nature, said, "As the environment in China improves and becomes friendlier to wild animals, the country will face new challenges in living harmoniously with wildlife."

"A new management system for the country's natural resources should be established and more innovative ways are needed to maintain good relations between humans and wildlife," Huang said.

To reduce the number of conflicts, Huang has piloted a forest restoration project on the outskirts of Beijing in an attempt to improve vegetation in the area. If the project is successful, it is expected to provide a possible solution for improving the quality of wild animals' habitats.