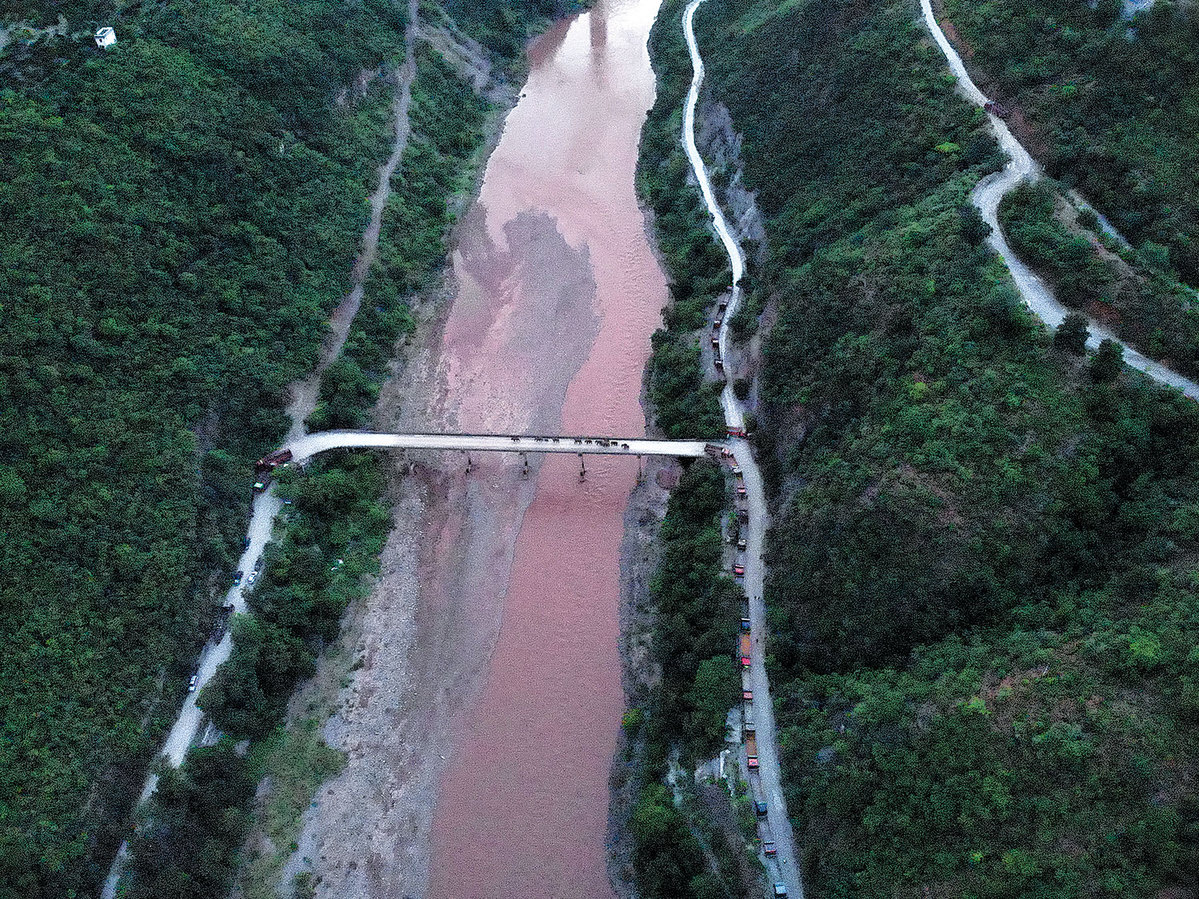 Dedicated teamwork pays off as the animals return south in Yunnan

Zhang Yufu, 37, a truck driver in Yunnan province, was given a special assignment on Aug 3 by the company he works for－to follow a herd of 14 Asian elephants.

He also had to block a road in Yuanjiang county, Yuxi, to guide the animals moving south to their original habitats in Pu'er and the Xishuangbanna Dai autonomous prefecture in the province.

As part of a dedicated team of "mobile guards" for the elephants, Zhang drove on rugged mountain roads for days, eating and sleeping in his truck. "We had to be on call 24 hours," he said.

Like many local drivers joining the mission, he had not encountered elephants before. When the herd passed his truck, Zhang held his breath. "Everyone kept quiet, both ourselves and the elephants," he said.

At about 8 pm on Aug 8, Zhang and some 100 other truck drivers waited at the Yuanjiang Bridge spanning the Yuanjiang River as the herd passed.

He added: "Everyone was cheerful seeing the elephants pass over the bridge. I felt proud to be part of the team." 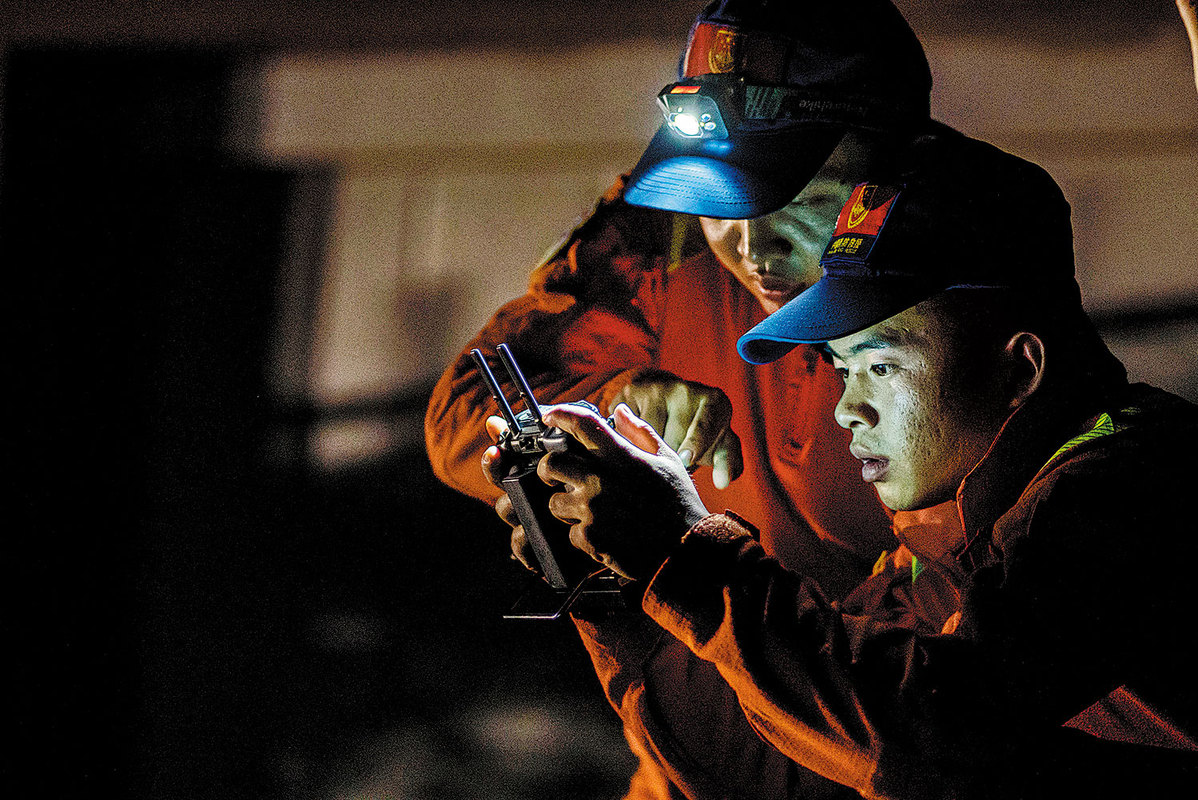 Experts said the team's work marked a significant breakthrough in efforts to guide the animals back to their habitats, adding that it was a decisive moment when the herd crossed the bridge, as it meant the elephants were about to end their journey north and head for home.

Chen Mingyong, a professor at Yunnan University's School of Ecology and Environmental Science, said: "Habitats for Asian elephants can be divided into 'most suitable', 'suitable', 'general' and 'not suitable'. The tropical rainforest and evergreen broad-leaf forest in Xishuangbanna are the most suitable habitats for the species. The further north the elephants go, the lower the temperature. There is also less food and a less suitable environment for them."

The Yuanjiang River, one of the oldest in Yunnan, separates "suitable habitat" and "general habitat", with clear differences in vegetation on its southern and northern banks. Crossing the river meant the herd was heading for more suitable habitat, which also helped increase stability and security for the animals, Chen said.

Although climate and a willingness among the elephants were key factors in the herd moving toward home, the efforts of scientists and workers also played a major role.

The Yuanjiang River was a natural barrier. Yang Yingyong, executive deputy commander of the Yuxi safety precautions and emergency response headquarters in charge of the roaming elephants, said the water flow in the river rose from 73 cubic meters per second on average in mid-May when the herd waded across it, to 120 cubic meters per second in August, so it was impossible for it to wade through the river again. 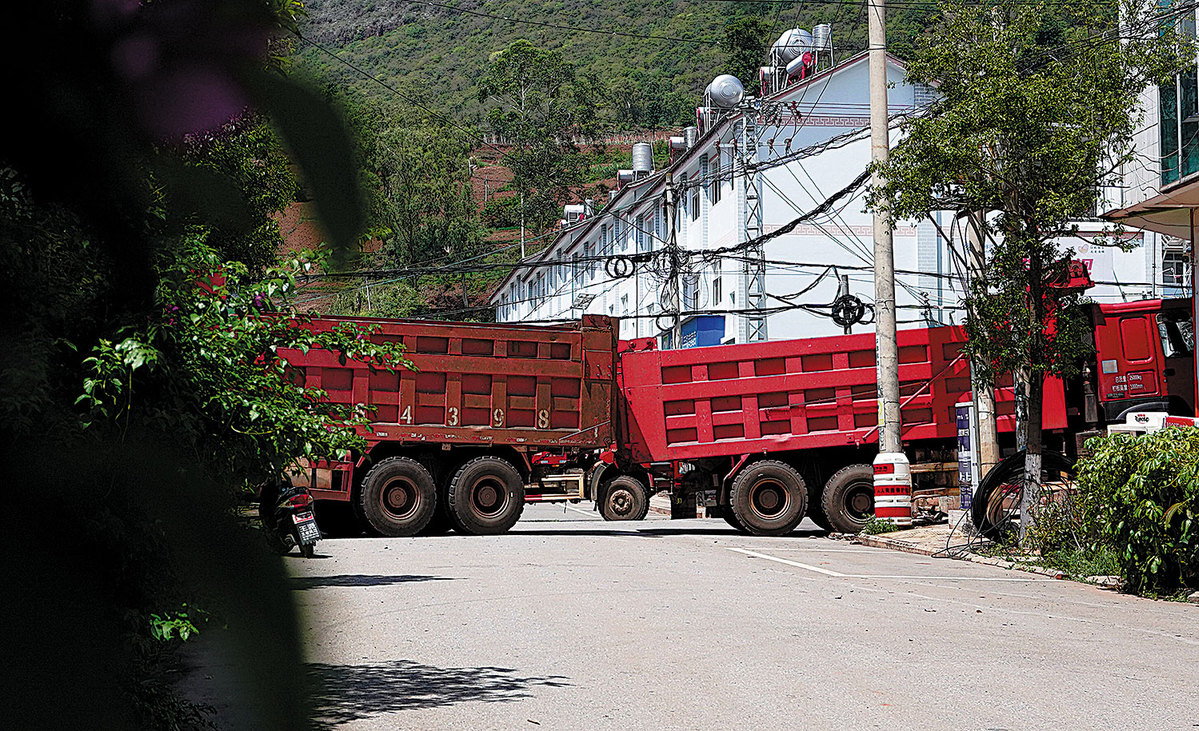 To avoid danger or casualties, the headquarters decided to guide the elephants across the Yuanjiang Bridge near National Highway 213.

Several days before the herd arrived in Yuanjiang county at the end of last month, experts walked 76 kilometers along the Yuanjiang riverbank to find an ideal location for the animals to cross. The county government sent 2,844 vehicles and 6,673 workers to clear roads for the animals to pass safely. Food was also used to lure them away from populated areas, with water being poured onto roads for cooling purposes, Yang said.

"We needed to investigate the terrain in advance to come up with a route that avoided gullies and valleys. We blocked roads and set small step-by-step goals for the elephants to reach a specific location each day, but they were not so cooperative. The designated straight-line distance was 30 km, but the animals walked 143 km," he said.

The local government also sent workers to promote safety in areas populated by 73,000 people, through which the elephants passed.

"Although the herd deviated from the designated route a number of times, it finally crossed the bridge, with safety of humans and the animals secured," Yang added. The herd heads back to its traditional habitat. [Photo by Wei Xiaohao/China Daily]

The Asian elephant, listed on the International Union for Conservation of Nature's Red List of Threatened Species as "endangered", is under top-level protection in China.

Since the herd left its habitat in March last year, the animals' adventures have drawn the attention of millions of people worldwide. News of the elephants crossing the Yuanjiang Bridge received about 40 million views on Sina Weibo.

Li Jiangping, 46, a forestry worker in Mili village, Yuanjiang, fed the elephants after they crossed the bridge.

"I loaded corn and bananas on a truck and drove to a specific location. I then placed the food 1 km to 2 km away from the herd and waited for the animals to eat," he said.

Li was only able to sleep at midnight when the herd stopped moving. Most of the time, he just dozed in the truck. "At first, I felt a little scared placing the food, but everyone was doing a good job, guided by experts," he said.

"Our biggest hope was that the elephants could make a smooth return to their habitat," he added.

Li Jianchun, 42, an official from Mili, said about 60 local residents joined the work, adding that most of them welcomed the arrival of the herd as "an event that only happens once every 100 years".

"The elephants are very smart. They tended to choose the most convenient and least-populated routes. Once, they didn't set foot on a designated route, instead preferring a little-known path. They took only 40 minutes to pass along this route. We were largely left behind, so we had to speed up to catch up with the animals. That day, we didn't have dinner until 10 pm," Li said.

Although he could only rest at about midnight when the elephants slept, most of the time he felt "happy and excited".

"We found that the animals visited different communities when they headed north and when they returned south. We joked that they were touring our village," he added.

On its way home, the herd remained in Yuanjiang for 13 days before crossing the bridge.

Chen, from Yunnan University, said that although the Yuanjiang River Basin is rich in food and water, the area is unsafe for the elephants, as they have nowhere to hide. In addition, there are many large and medium-sized cities in northern Yuanjiang, where most people have no experience of such animals, which poses a high safety risk. 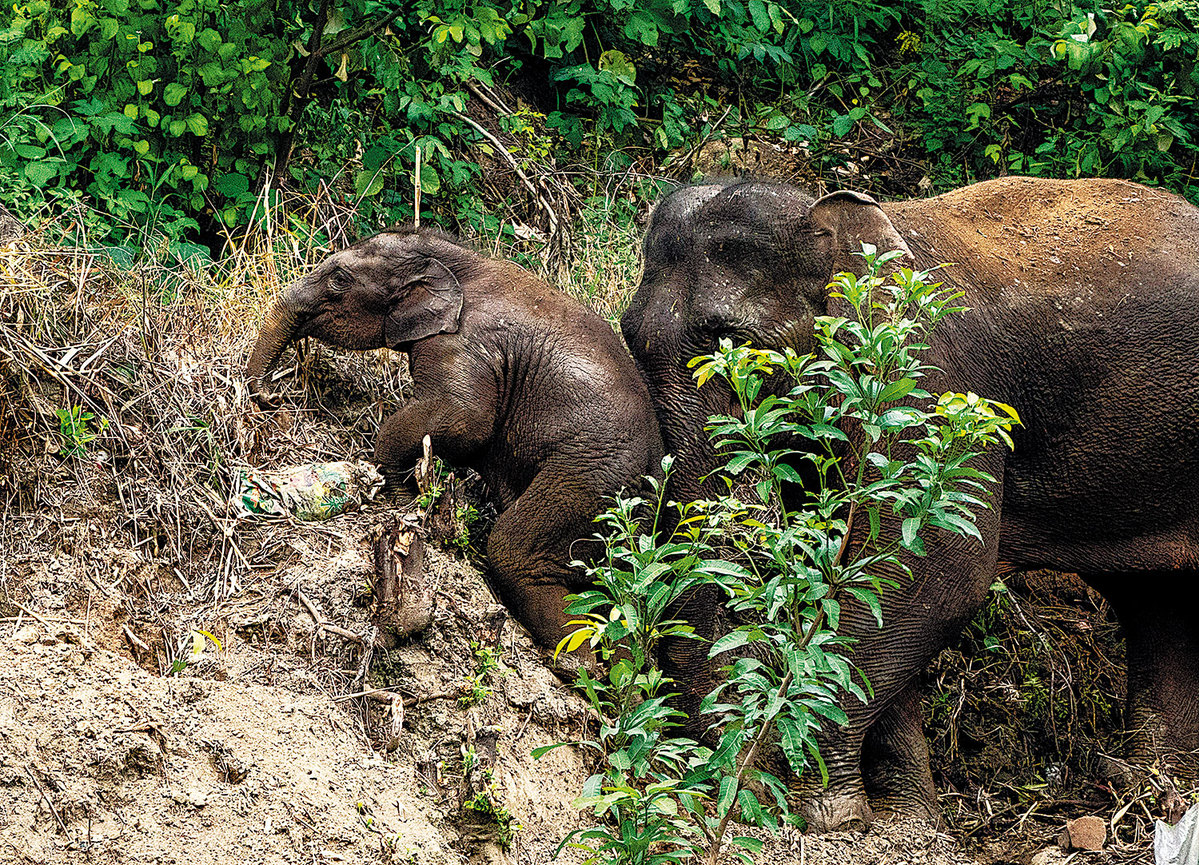 An elephant calf tries to climb a slope with the help of an adult animal. [Photo/Xinhua]

On April 16, it left Mojiang county, Pu'er, and entered Yuanjiang. Since then, the animals have roamed about 1,300 km for more than 110 days, passing through Yuxi, Honghe Hani and Yi autonomous prefecture, and Kunming, capital of Yunnan.

As the herd moves, it is monitored by humans, drones and infrared thermal imaging devices 24 hours a day, with the aim of learning and predicting the animals' travel routes. This work enables measures such as traffic control, evacuation procedures, alerts and placing food for the elephants to be taken in advance.

Wan Yong, head of the Yunnan Forestry and Grassland Administration and director of the management and control headquarters in charge of protecting the roaming elephants, said these efforts successfully prevented the animals entering populated areas and encountering residents.

"In areas through which the elephants may pass, people are asked to stay home and drivers are dissuaded from entering. Power is cut off at night and factories suspend operations, reducing human intervention and ensuring the animals pass safely," Wan said, adding that villagers are compensated for losses. By Aug 8, insurers had completed 939 cases, paying out a total of about 2.16 million yuan ($333,288), according to data from local authorities.

"The idea is not to intervene too much or anger the elephants. We correct the animals' direction properly and guide them mildly," Wan said, adding that elephants may attack people if the animals are frightened. The herd passes under a highway bridge in Yuxi, Yunnan, on Aug 9. [Photo/Xinhua]

Chen Fei, director of the National Forestry and Grassland Administration's Asian Elephant Research Center, said experts involved with wild animals and information communications joined the program. They gathered a huge amount of useful data for scientific research to protect the animals and for an emergency response.

"To follow the herd, we need to ensure that monitoring devices are moved and installed quickly－despite a complicated natural environment－and transmit the information to different departments in real time. We received strong support from fire prevention and forestry control authorities, the police, electricity and communications departments, and companies," he added.

At night on Aug 12, the elephants left Yuanjiang and entered Mojiang county, Pu'er, part of their traditional habitat.

All 17 elephants in the herd have now returned to their traditional habitat, and no casualties－elephant or human－have been reported. 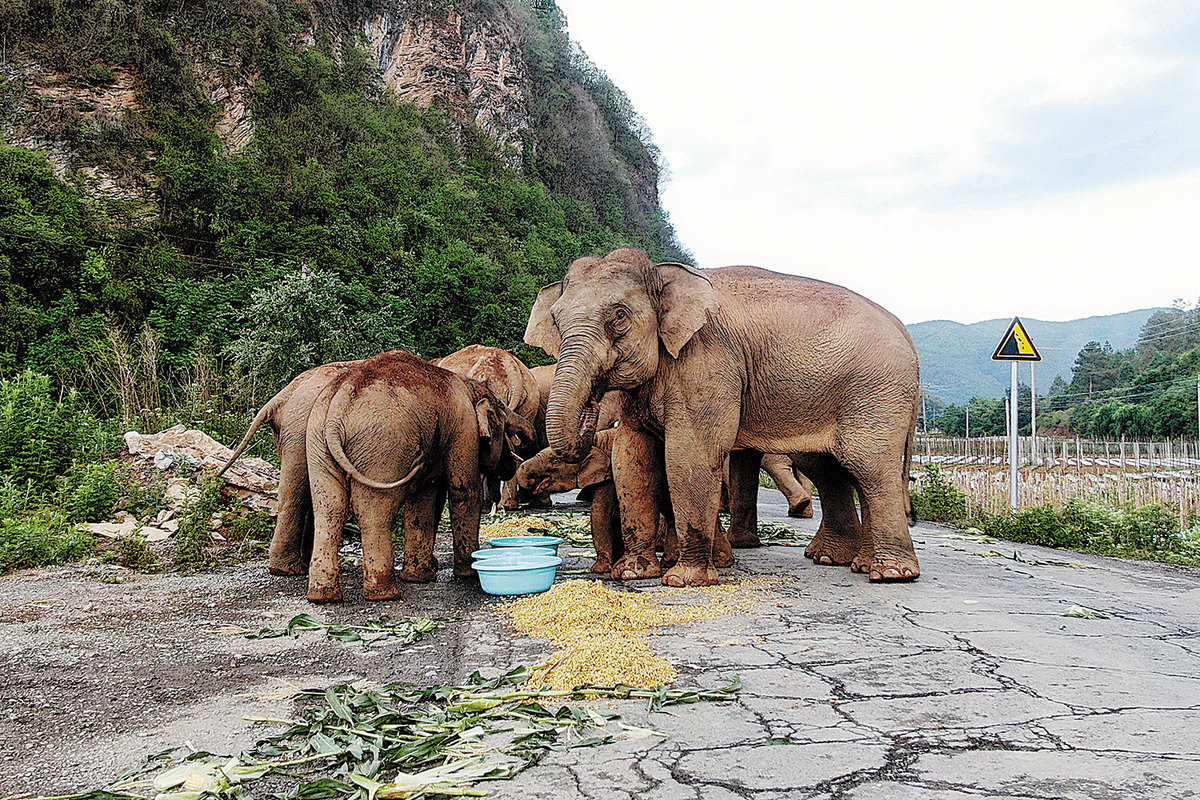 The elephants feed away from populated areas in Jining district, Kunming, on June 3. [Photo/Xinhua]

Shen Qingzhong, a senior engineer at the reserve, said the elephants may roam again.

Asian elephants used to live in the Yellow River Basin and large areas of the Yunnan-Guizhou Plateau.

Shen said: "Roaming is normal behavior for elephants because it helps them find new habitat and promotes communication among different groups. The animals are highly intelligent, have good memories and can adapt to their environment. As the number of wild elephants in Yunnan grew rapidly, it became common for the animals to roam."

He suggested learning from experience and using natural barriers such as rivers or mountains to control the elephants' range of activity within a suitable habitat. "Since we have established complete working systems, if a similar migration occurs, I believe we can respond to it calmly," he said.

Since 1978, the number of wild elephants in Yunnan has risen from about 150 to some 300. In the mid-1990s, the species only lived in the Xishuangbanna reserve and the Nangunhe Nature Reserve. Since then, the animals have roamed a large area outside the reserves, including three cities.

With the government strengthening the ban on hunting, wild elephants are no longer afraid of humans, and are frequently seen entering villages or farmland to find food, experts said.

Wan said the protection of Asian elephants involves biological and ecological safety in Yunnan, as well as public security.

The provincial government will accelerate construction of a national park, with a strengthened monitoring and early warning system to "promote a harmonious relationship between humans and elephants", Wan added.