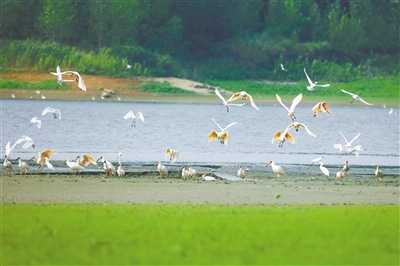 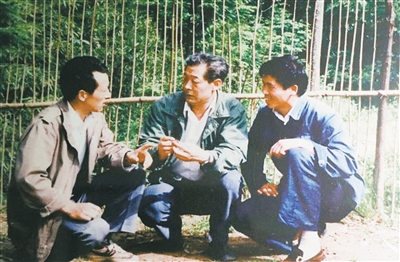 In the 1980s, Liu Yinzeng (middle) taught the staff in the protection station the methods and technical points of Crested Ibis ring.

Liu Yinzeng is getting old.

After leaving Beijing, where he had lived for 80 years, he moved to Yangxian County, Shaanxi Province, at the south foot of the Qinling Mountains.

40 years ago, in Yaojiagou, Yangxian County, Liu Yinzeng found the only seven wild Crested Ibis in the world. Since then, Liu Yinzeng started the career of protecting the crested ibis, and he was closely associated with the Crested Ibis for the rest of his life.

An adventure 40 years ago

Not long ago, the reporter walked into a quiet garden community in Yangxian County, where Liu Yinzeng, 84, lives.

"The environment of this community is very good. There are more than 20 kinds of birds here." Liu Yinzeng led the reporter through the shady road in the community, introducing while walking.

When they entered the house, several books on ornithology were placed on the tea table and sofa in the living room. They saw a group photo of the Crested Ibis Seminar on a wall in the living room. "Now, they are all old. When they protected the Crested Ibis with me, they were all young guys. "Liu Yinzeng pointed to the person in the picture and said.

The photo reminds Liu Yinzeng of the beginning of his fate with the Crested Ibis in 1978。 “I suddenly received the task of visiting the whole country to find Crested Ibis. If I don't find them, I will truthfully explain to the international ornithological community that the Crested Ibis has disappeared in China; If I find them, I will study how to protect them next. "Liu Yinzeng recalled and said, "in such a large country, looking for an endangered bird is not like looking for a needle in the sea?"

Since childhood, Liu Yinzeng was interested in flowers, birds, fish and insects, etc. After graduating from University, he entered the Institute of Zoology of the Chinese Academy of Sciences. Before receiving this task, he had been engaged in bird field survey for five or six years. Although he was deeply aware of that there are many difficulties, Liu Yinzeng led the team to set out at the age of 41 with his strong professional enthusiasm and strong sense of mission. According to the distribution of Crested Ibis in history, Liu Yinzeng conducted surveys in more than a dozen provinces such as Liaoning, Shandong, Shaanxi and Gansu, showed photos of Crested Ibis to local people, played slides of Crested Ibis when they played movies, and mobilized the people to help find them.

Is the Crested Ibis really extinct? With the project coming to an end, Liu Yinzeng can only painfully complete the report. But he was unwilling to announce to the world that "Crested Ibis has been extinct in China". Therefore, he applied and decided to review several areas with greater possibilities, including Qinling region in Shaanxi Province. In history, there are many Crested Ibis in this place, and it is located in remote areas. The degree of agricultural mechanization is low, and the change of natural environment is relatively small. In May 1981, Liu Yinzeng came to Yangxian County for the third time. As usual, he runs around. When people played movies in the countryside, he played slides of Crested Ibis.

Once, after he finished the slide show in the county cinema, He Choudan, a villager in the village of Solitary Soul Temple, found him and said, "I've seen this bird, but we don't call it Crested Ibis, but red crane."

"At that time, I was not surprised, because in the past, such reports were of little value." Liu Yinzeng put out a lot of photos for He Choudan to identify. Unexpectedly, he could select photos very accurately. Liu Yinzeng was very happy and decided to go to the scene immediately. Sure enough, in Yaojiagou with an altitude of more than 1,000 meters, Liu Yinzeng saw several birds flapping their wings on tall and lush Cyclobalanopsis glauca trees. Through the telescope, he saw a pair of adult birds perching in a tree, with a long beak, red head and a touch of light red on their feathers. In the nest, there were three young birds crying for food. Later, he found another pair of adult birds, a total of seven.

"That's it, Crested Ibis!" Liu Yinzeng shouted happily, "my three years of efforts have not been wasted. I finally found you."

The news were spreaded all over the world. But Liu Yinzeng's mood was mixed. To his delight, he finally found the Crested Ibis. To his sadness, what will happen to the Crested Ibis in the future?

"We must protect these seven 'babies' and never let them become extinct in China." Liu Yinzeng said. Under a tree with crested ibis nest on the hillside of Yaojiagou, Liu Yinzeng listened to the crisp cry of three young Crested Ibis and felt unprecedented pressure.

Crested Ibis was very precious and must be protected. But the four young people were still confused: What do they eat? Where do they live? How to they fly?

Lu Baozhong sincerely admired Liu Yinzeng: "Mr. Liu has been to countless places. After he found the Crested Ibis in Yaojiagou, for three consecutive years, he has to go to Yangxian County every year and live in Yaojiagou for a few months."

Liu Yinzeng and four young people adopted the most "cliche" but also the most effective protection strategy - " people follow birds" to monitor the Crested Ibis "one-to-one" "In order not to let the Crested Ibis out of our sight, we have to climb over the ridges, crouch over the nest trees and climb over the hills within 5 square kilometers. When we are busy, we don't even have time to eat and sleep." Lu Baozhong recalled and said.

After the breeding period of Crested Ibis begins, they set up a duty shed and an observation shed under the tree and parallel to the bird's nest for 24 hours. In order to prevent snakes, weasels and other natural enemies of Crested Ibis from climbing up the tree and swallowing eggs and young ones, they smeared butter on the trunk, installed blade racks, hung umbrella snake guards, and sprinkled realgar around the tree... In order to make the villagers in Yaojiagou also supported and participated in the protection of Crested Ibis, they actively strived for projects, built small hydropower stations in the village, and helped the villagers grow agaric and chestnut, and established a primary school. Villagers no longer use chemical fertilizers and pesticides in rice fields, and the harmonious symbiosis between Crested Ibis and people has been realized.

By 1984, the local protection of Crested Ibis in Yaojiagou was becoming more and more mature. Liu Yinzeng gradually withdrew from the front line of protection, mainly engaged in macro guidance and solving technical problems.

After returning to Beijing, in addition to his daily work, Liu Yinzeng also served as a science popularization counselor in several schools and Beijing Children's palace. He told the story of Crested Ibis to children who loved science, so that many teenagers knew about Crested Ibis, learned about a large number of birds, and established the awareness of loving and protecting birds.

Under the cultivation of Liu Yinzeng, Lu Baozhong and other young people gradually grew up and became a new generation of Crested Ibis herders in Yangxian County.

"Mr. Liu Yinzeng is a pioneer and example in the field of Crested Ibis protection. He is a real practical man. His enthusiasm and persistence also infected me." Liu Yi said.

Guard across more than 1,000 kilometers

At the Crested Ibis protection station in Yaojiagou, projectors, binoculars, cameras and other equipment were also placed in the room. These old objects silently told many details of Liu Yinzeng's protection of Crested Ibis.

In August 2010, Liu Yinzeng, 73, once again crossed more than 1,000 kilometers from Beijing to Yangxian County. Without taking time off, he revisited the place where the Crested Ibis was found. "This is my second hometown. I'm still so familiar with everything! " He said.

After his retirement, as long as there are important Crested Ibis protection forums and public welfare activities in Yangxian County, he would overcome all kinds of difficulties and return to Yangxian County again.

At the Symposium on the 30th anniversary of Crested Ibis protection held in Yangxian County on May 23, 2011, Liu Yinzeng listened carefully to the opinions of Chinese and foreign experts and scholars and felt a lot. In those years, five people spared no effort to protect seven birds. Now, they have grown to more than 1,600. Thinking of this, he sang the bird song created by himself: "Separated from the red crane for 20 years, the Yangxian County in my dream is my hometown." At the same time, he created a new chapter on the scene: "The ancient tower in Yangzhou welcomes old guests, and bird herders create a new chapter. Red cranes are flying in the air to thank you for taking care of them for 30 years... "

In 2018, he made up his mind to settle in Yangxian County and return to the Crested Ibis he loved and guarded for half his life. The local government of Yangxian County also awarded Liu Yinzeng the title of "honorary citizen".

"Starting from my home, I walked 20 minutes to the paddy field. If I want Crested Ibis, I can see them when I go out and walk around. "Liu Yinzeng said.

After settling in Yangxian County, Liu Yinzeng went to Liu Yi from time to time to understand the details of Crested Ibis breeding. He was very happy to see the Crested Ibis population growing year by year. Lu Baozhong is also a close friend of Liu Yinzeng in Yangxian County. In those years, Lu Baozhong was a young boy. Now, he has retired from the post of deputy director of the administration of Shaanxi Hanzhong Crested Ibis National Nature Reserve. In their spare time, they talked about all kinds of stories about the protection of Crested Ibis, and the time seemed to stand still at this moment.

"Crested Ibis is beautiful and spiritual. It is a special bird that needs to contact people. Therefore, the protection of Crested Ibis should be promoted to the understanding of culture and history, so that the public can be more active as the guardian of Crested Ibis."

In his life, Liu Yinzeng has seen many beautiful birds, but the Crested Ibis is the most destined for him.